Chagall lived to the age of 97. In his lifetime, he was recognised as one of the great painters of the century. What was his secret?
‘If I create from the heart, nearly everything works; if from the head, almost nothing.’   More here.
1930's
John Heartfield by Niamh Keegan

Between 1932 and 1933 Heartfield distributed his artwork criticising the Nazis during their rise to power as posters he put on the streets of Berlin. This gained him the attention of the Nazi Party and on the 14th of April 1933 the SS broke into his apartment as he packed up to leave.   More here.
Josef Herman by Elena Montazemi Safari

Josef Herman was a Jewish-Polish artist. Herman fled from Poland to Britain during the mass persecution of Jews during the Holocaust in 1938. Herman settled in Wales,  More here. 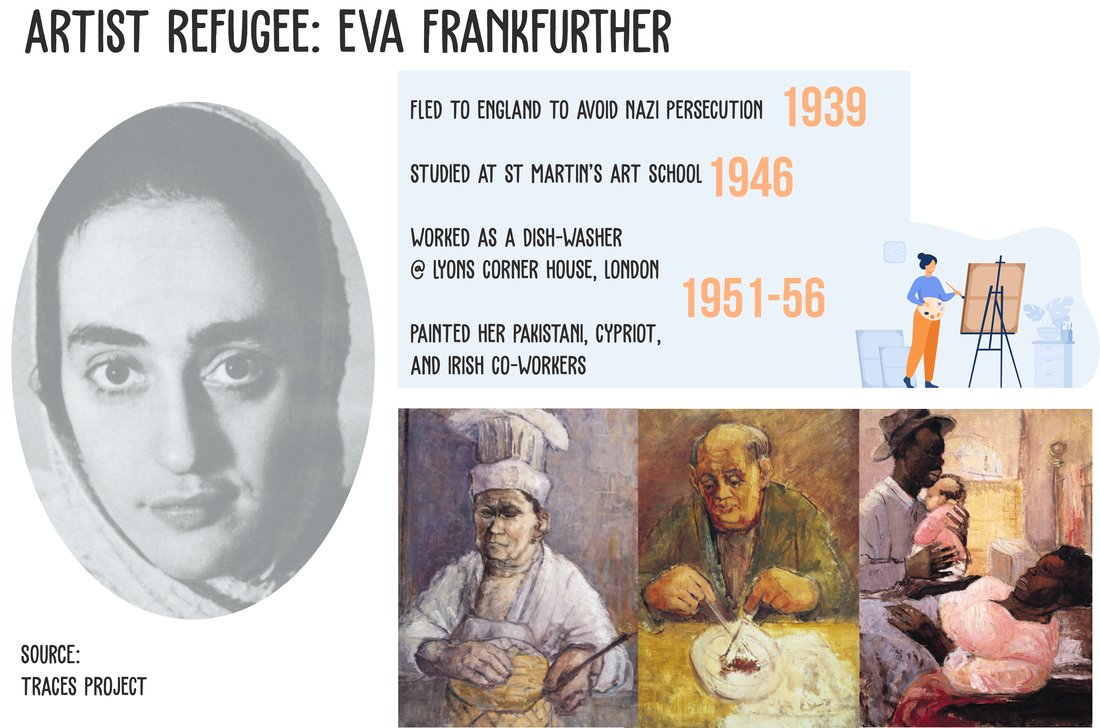 Eva Frankfurther, a German Jew and a talented figurative painter, grew up as a refugee during this era of turmoil. At the age of nine, she fled with her family to England in the late 1930s to avoid Nazi persecution in Germany. ​ More here
Johana Alexandra ‘LOTTE’ Jacobi by Holly Haynes

Johanna Alexandra Jacobi, known popularly as Lotte Jacobi, is recognised as one of the 20th century’s leading portrait photographers of major cultural personalities, as well as for capturing ordinary people in both her country of origin and adopted homeland.  More here. 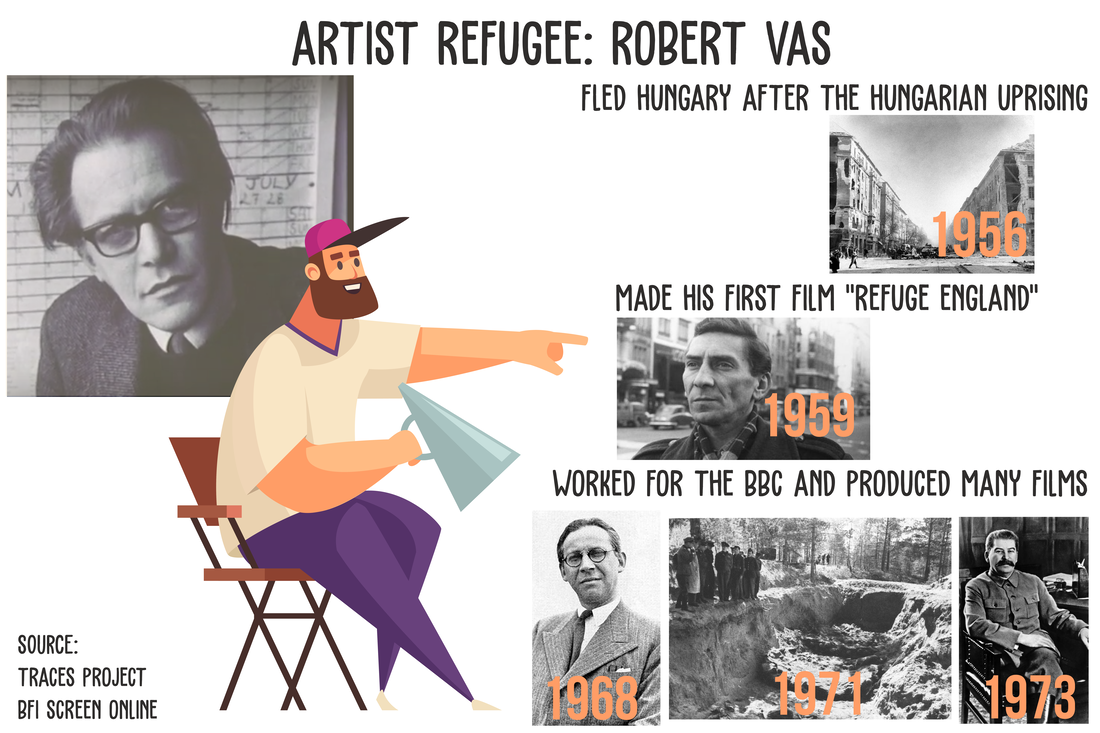 After the Hungarian uprising in 1956, Robert Vas, a BBC film director, sought sanctuary in the UK. He has made many seminal films. His first film, Refuge England (1959), depicts the day in the life of a Hungarian refugee who arrives in England.  More here. 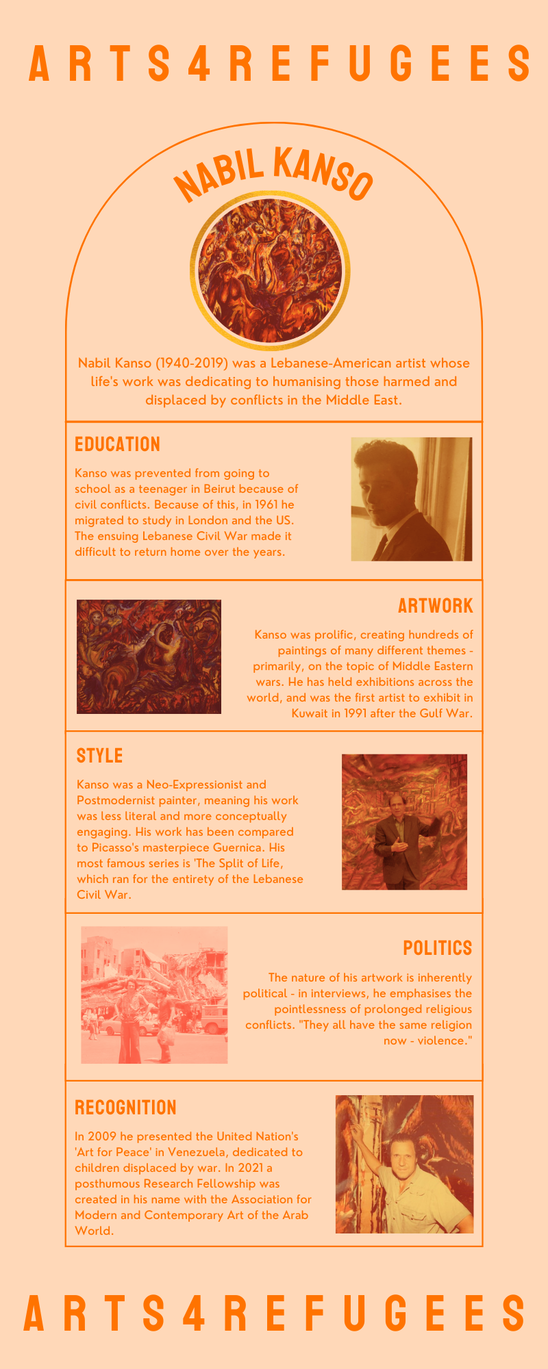 The USA was gripped by a paranoid belief that threats to the status quo were somehow contagious and had ‘infiltrated’ art. One member of Congress, George Dondero, believed that ‘modern art is Communistic because it is distorted and ugly’. He even prompted an FBI investigation against Shahn, who monitored his studio and threatened him with deportation in 1952.  More here.

​Eva Jiřičná was initially part of an exchange programme and was asked to work for the Greater London Council as an architect. In August of 1968, Warsaw Pact forces invaded Czechoslovakia with 500,000 soldiers. Around 300,000 people feared for their lives, forcing them to flee. This meant leaving their homes, families, and the country of their birth. The crisis was named the Prague Spring. Its legacy echoed in the lives of its displaced artists across the world.  More here. ​
Reinaldo Arenas by Priscilla Otero

Reinaldo Arenas, born in Cuba in 1943, wasn’t always a writer. At the young age of fourteen, Arenas joined the guerilla movements in support of Fidel Castro. ... He wrote his first novel Celestino antes del alba (Singing from the Well) in 1967 .   More here.

Vija Celmins is a celebrated Latvian American artist. Her family fled Riga in 1944, moving between displacement camps before eventually finding passage to the US in 1948. Celmins later revealed: “it wasn’t until I was ten and living in Indiana that I realized being in fear wasn’t normal.” More here.

Internationally celebrated artists have arisen from the depths of this tragedy. Hong Dam was one of them. Resettled in the UK, Dam fled Vietnam at eight years old.  More here.

To many the name Bob Marley is notorious. Notorious for his contribution to reggae and the Jamaican cultural surgency in the 1960s, for his Rastafarian beliefs, and for his call for love, peace, and equality. However, not many also know that Bob Marley was a refugee. More here. 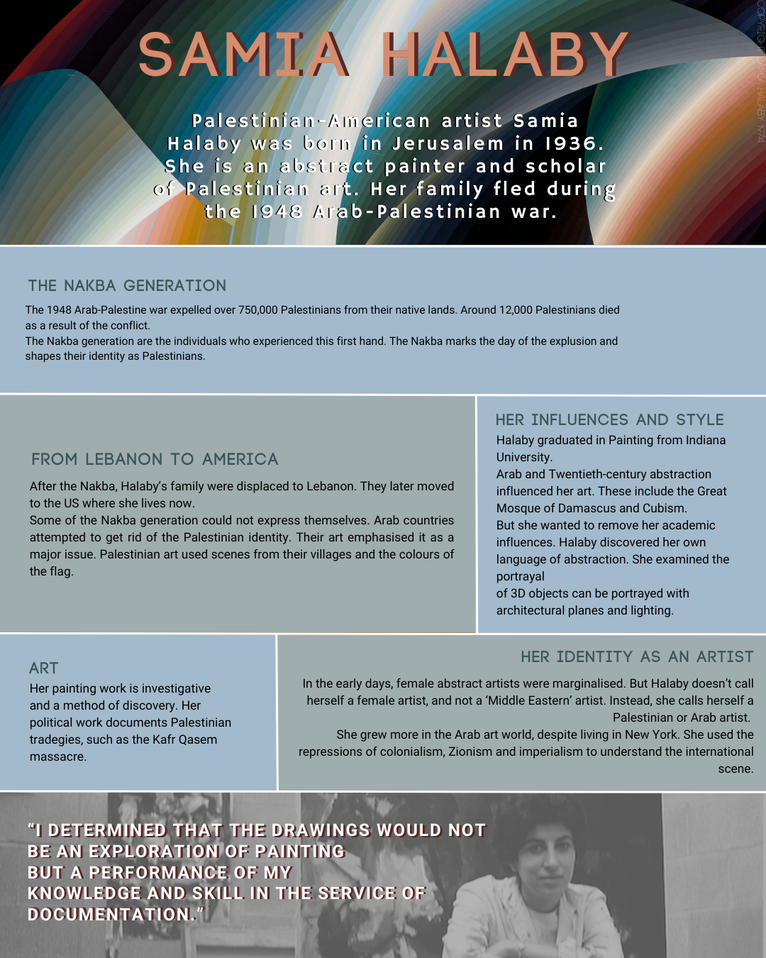 Over 700,000 Palestinian Arabs fled or lost from their homes between 1947-49. This was over half of the pre-war Palestinian Arab population.  Samia Halaby and her family were displaced to Lebanon. From there to the US.  More here.

Ali Ahmad Said Esber, also known as Adonis, has been said to exert the same influence in the world of Arabic poetry as T.S.Eliot did in the world of anglo-saxon poetry.  More here.

In 1967, the Nigerian civil war broke out, causing over 2 million civilian deaths and leading over 500,000 refugees to flee the country. Rotimi was one of them ... forcing his family to seek refuge in the UK.  More here.

After 26 years of bloodshed, destruction and chaos, the Sri Lankan government defeated LTTE in May 2009. However, by that time, it has left 80,000–100,000 dead, over 300,000 internally displaced and over 145,000 refugees.  Mathangi “Maya” Arulpragasam, (known as M.I.A) was one of these refugees. Her unique musical blends of rap and traditional Asian music ... More here.

The Lebanese Civil War killed around 120,000 people, with one million fleeing the region. That is one fifth of the pre-war population. Kanso’s dedicated his life work to raising awareness of Lebanese and Middle Eastern conflicts. Art was both a political tool and a method to navigate his own grief.  More here.

Hatoum’s work has global significance and impact on both people and art itself. She has had solo exhibitions across the world, from Paris to New York. In 2019, Hatoum won the Praemium Imperiale, recognising her lifetime achievement in sculpture. Hatoum is a testament to the global influence that refugee artists can have.  More here.

In 1922, Lucian Freud was born in Berlin and came from a Jewish family. In 1933, Nazi Germany began a more aggressive policy against Jews as Adolf Hitler rose to power.  Freud arrived in England as an outsider and unable to speak the language as he began his education at Dartington Hall School.  More here.
Mersiha Mesihoivc by Saher Ali

In the 1990's series of wars broke out in Yugoslavia (then known as the Socialist Republic of Yugoslavia). The Bosnian war was considered one of the bloodiest ... Mersiha Mesihoivc was a Bosnian refugee who fled to Sweden in 1995. More here.

At the age of nine, Jean immigrated to the USA with his family, developing his talent for music in school jazz bands and a teenage rap group. Major success came with the creation of hip-hop trio Fugees. More here. 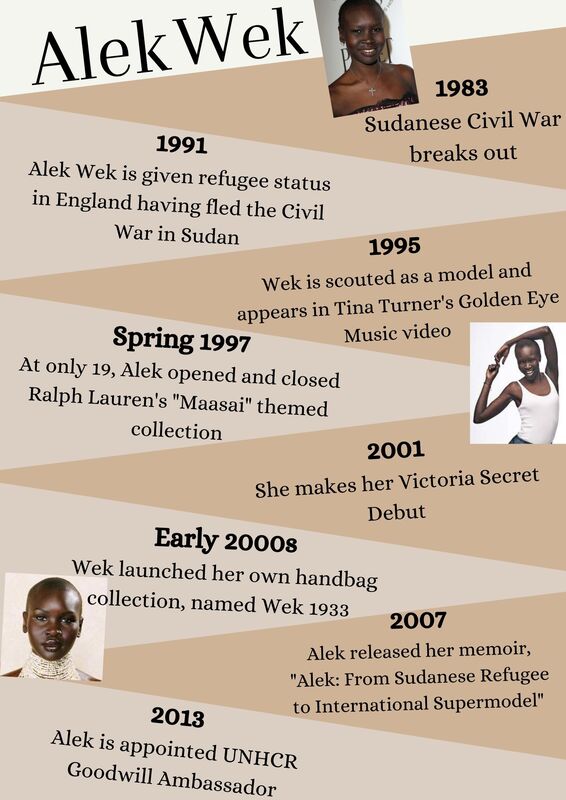 When the civil war started, Alek Wek was 9. Alongside her family, she fled the village. Later on, her mum only sent Alek and her sister to London, both unable to speak English. As she describes, when the war broke out, “Life as we knew it came to a devastating end.” More here. 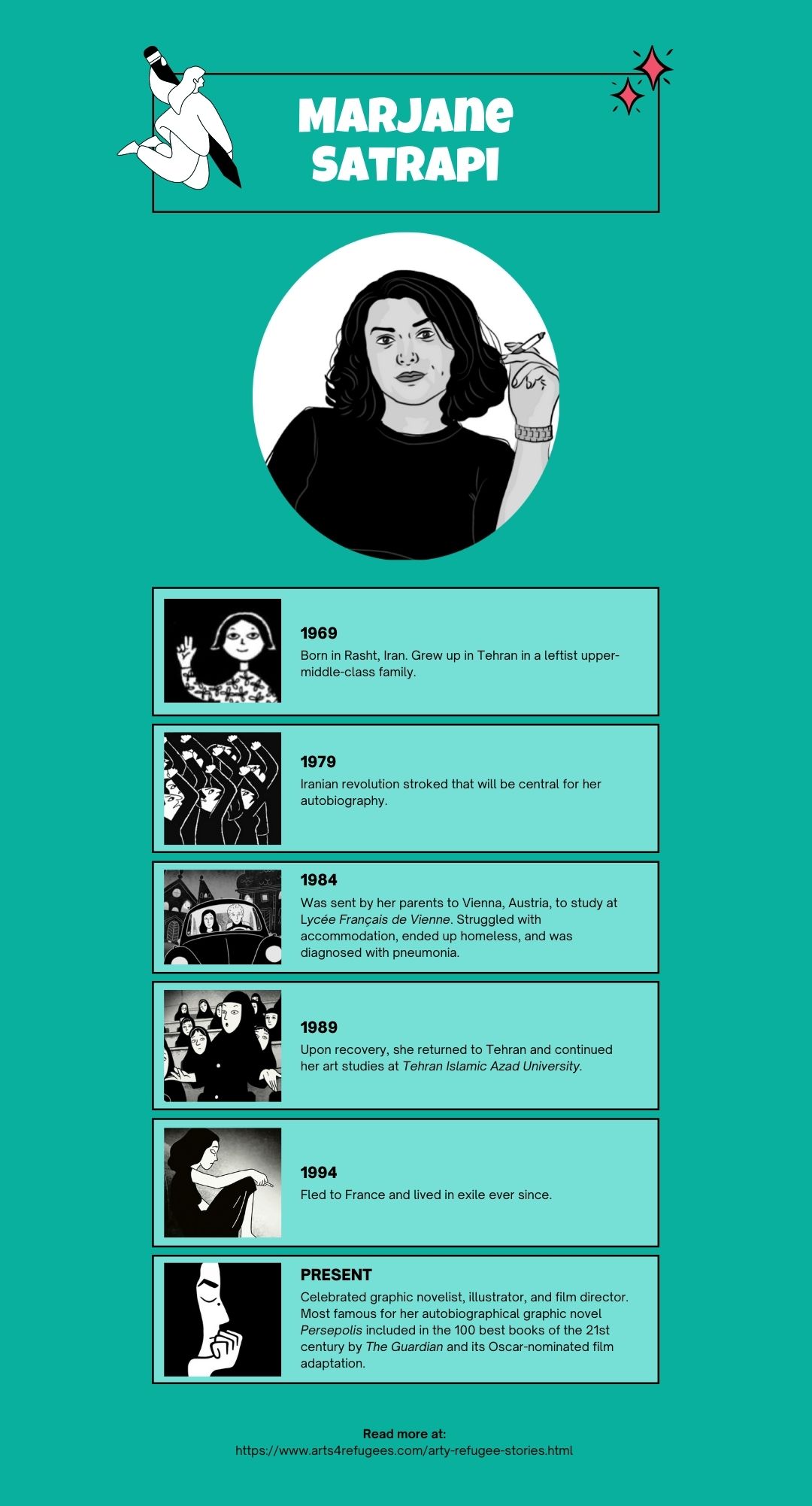 Marjane Satrapi returns agency to refugees through her stories and shows how the victims of humanitarian crises experience political struggle and how they cope with it.   More here. 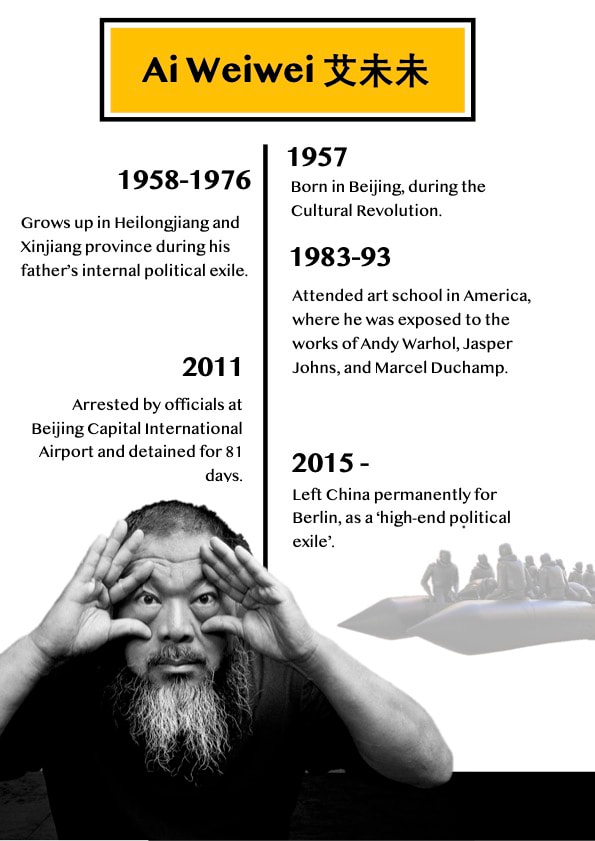 Since leaving China in 2015, Ai Weiwei’s focus has turned to the refugee crisis.  Drawing from his dehumanising experiences as a child in exile, and a now a ‘high end political refugee’, Ai has sought to capture the plight of refugees.  More here.

Before she was an internationally renowned singer-songwriter, Regina Spektor was first a refugee from the Soviet Union. At age 9, her family entered the United States, fleeing from anti-Semitic oppression in Russian society. More here. 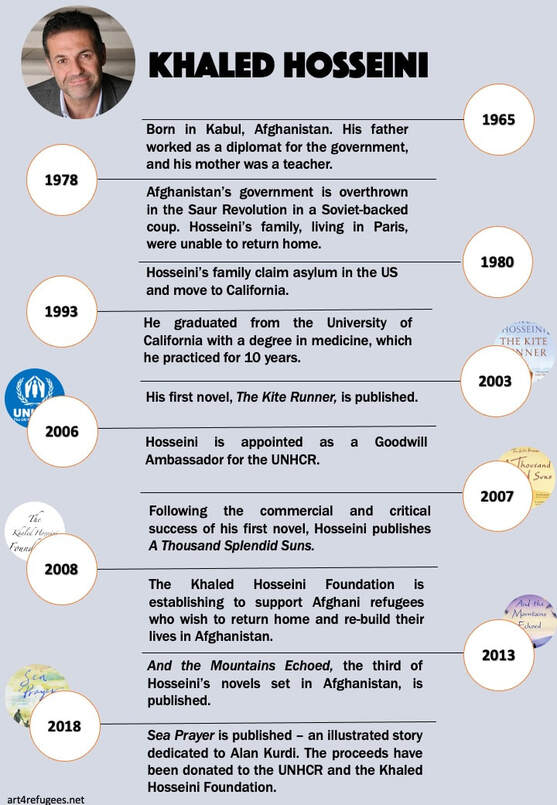 Best known for his novels The Kite Runner, a Thousand Splendid Suns, And The Mountains Echoed, Khaled Hosseini is a best-selling author born in Kabul, Afghanistan in 1965.  More here. 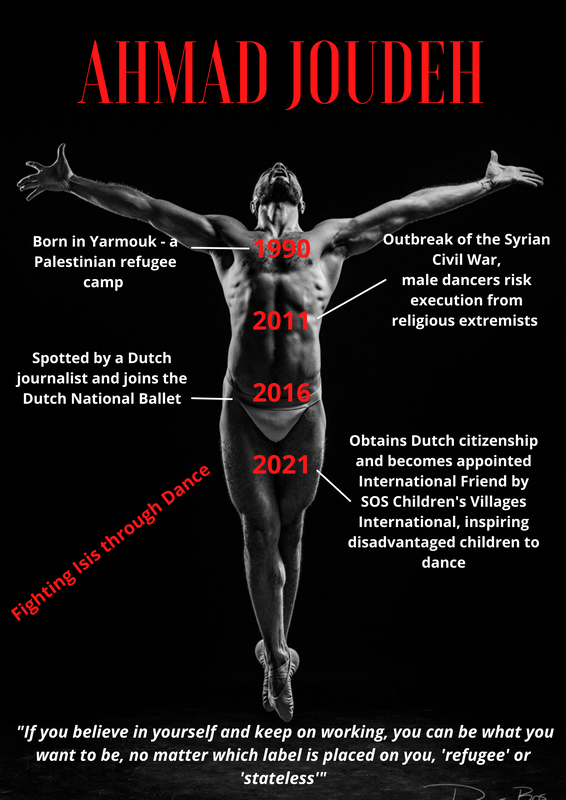 The outbreak of the Syrian civil war in 2011 left many without a home and claimed the lives of half a million people over the past decade. Ahmad Joudeh was one of the children whose life was severely affected by the conflict. More here.
Kinan Azmeh & Kevork Mourad by Elena Montazemi Safari

Kinan Azmeh is a Syrian composer and clarinettist. Kevork Mourad is a Syrian-Armenian visual artist. In 2020, Azmeh and Mourad performed an audio-visual performance called Home Within. In this work, art and music create reflection on the Syrian revolution and its aftermath. Rather than following a narrative, the artists document specific moments in Syria’s recent history and reach into their emotional content in a semi-abstract way.  More here.

Hanaa Malallah is an Iraqi artist, researcher and educator based in London since 2006. She fled Iraq when faced with threats from one of the fundamentalist militia groups which managed to gain a foothold in her country in the aftermath of the 2003 invasion. Malallah’s story is one of many, with an estimated 9.2 million Iraqis internally displaced or seeking refuge abroad as of 2021. More here

Basel Zaraa is an artist and musician, who uses his experiences of being a refugee, and of coming from a family of refugees, in his work.  He was born in the Yarmouk Palestinian refugee camp in Syria, founded in 1956.  Now he lives in the UK.  More here.